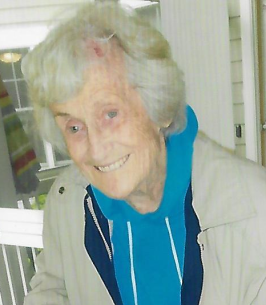 Thelma M. Hauck, formerly of Yorkshire, NY, passed away on Friday, March 18, 2022 at the Pines Healthcare & Rehabilitation Center in Machias at the age of 92.

She was born December 14, 1929 in Buffalo, NY a daughter of the late Charles and Mary (Stuherski) Hooper. She was a cleaner at the Alden Central School and loved animals and camping. She was also a member of the Alden Hook & Ladder as well as the Alden American Legion Ladies Auxiliary and was the former treasurer.

When I read obituaries I usually feel like they are so impersonal. Generally, not much is said about the person- who they were, what they did, the lives they touched. I have been given the honor to write a few things about my Grandmother and now I realize perhaps the reason people don’t write much is because it is nearly impossible to articulate your thoughts and feelings about someone in a few short paragraphs. This is not a conclusive list, rather a few highlights about my Grandmother.

My Grandma Bunny. The nickname came from some of her girlfriends teasing her about eating carrots and celery for lunch. If I am not mistaken, Grandma and these girls had created their own sorority which they named “We Poke Along”. Anyway, the nickname stuck and she was always known as Bunny. I have so many fond memories but one of my favorite is that she used to pick my sister and I up in her metallic powder blue Plymouth Corsica and take us roller skating. Now, most kids would be a little embarrassed by their grandma dropping them off at the rink. Grandma did not just drop us off at the rink. She would don her white leather skates with white pompoms neatly tucked into her little blue suitcase. She would skate with us and basically give olympic performances- skating fluidly backwards and forwards with spins. We
always thought she was so cool. The kids would start asking us where she was when we showed up without her. On the way back from the rink she would put on her rose colored sunglasses, roll down the windows and give us each our allotted half of a stick of Wrigley’s gum. We would bask in her glory the entire ride home.

My Grandmother was not only fun loving she was, without fail, always there for us. She would welcome us when we would show up at her doorstep. She helped us with schoolwork, put up with us painting her shower, she bandaged bloody knees (often followed by a Klondike bar religiously hidden in the freezer at all times), she allowed us to play outside on endless summer days as long as we were back “before the streetlights come on”. She would show up to every event you asked her and be your biggest fan. She would never forget a birthday. She would send a birthday card every single year without fail to her siblings, children, grandchildren, great-grandchildren and friends. That was a pretty tall order. There are quite a few of us. Grandma loved family parties. She just adored her family and being with all of them together. Christmas Eve parties were some of her favorite events where she loved to have a beer with a lot of fizz at the top.

These are just a few of my thoughts on Grandma Bunny, but I think it is safe to say that all of these things apply not only to me and my personal experiences, but they were qualities that she shared with everyone. She had the ability of making you feel seen. Of making you feel special. Of making you feel loved. That is what Grandma Bunny gifted to all of us. I’m proud to say she will live forever in each of us and that we will continue to bask in her glory for the entire ride.

In addition to her parents, she is preceded in death by her husband, George R. Hauck.

There will be no calling hours. A Celebration of Life will be held at a later date.