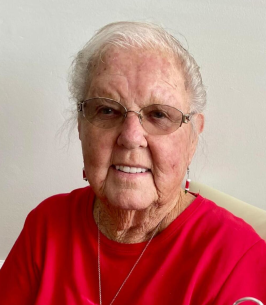 Josephine L. Tullar went to be with the Lord September 24, 2022. On October 2, 1929, Josie, as she was called by her Dad, was the tenth of eleven children born to Mabel and Elon Norton. Jo was predeceased by her siblings Margaret Hooper, Vivian Joslin, Donald Norton, Geraldine Eidenier, Marion Henry, May Hall, Maude Hanson, Luella Waldron, Elon Norton and Janet Crosby.

On October 13, 1951 Jo married Roy E. Tullar at the Arcade United Methodist Church. After Roy returned from his duty in the Air Force, the Tullars settled in Arcade. The family unit on East Main Street grew to include daughter Darlene and son Darrell.

In addition to being the ultimate homemaker, Josephine worked a number of jobs outside the home to help support the “extras” for the holidays. Through the years, she worked at the local production plants including Bordens, GTE Sylvania, Motorola, and Diamond Saw. One of her dearest hobbies was to feed and keep watch over the birds at her numerous feeders.

During their retirement years Roy & Jo enjoyed summering at Rushford Lake and wintering at the Villages of Seaport in Cape Canaveral, Florida. Their seasonal homes became a comfortable meeting place for numerous friends and family. The loving support of so many friends became ever the more dear when Roy died on February 19, 2019.

A graveside memorial service will be held 11:00 am Saturday October 15, 2022 at the Arcade Rural Cemetery, 107 Park Street Arcade NY. Memorial gifts may be made to the charity of one’s choosing.